You can see that the iPhone 12 lineup no longer ships with free EarPods and power adapter. And when it comes to the biggest update, it must be the capability of supporting 5G, the next-generation mobile network technology. According to Apple's CEO Tim Cook, 5G is this decade's new technology which provides a step change towards the new era's iPhone.

As the first 5G-enabled iPhone, although it doesn't pack a lot of surprises, the iPhone 12 lineup is still attractive to a great number of people who intend to replace their phones especially iPhone fanatics. Since it has four models, the following will firstly explore the common updates and new features of the models. Then it'll point out their differences from many aspects. Finally it'll guide you how to make preparations for buying them. Just keep reading. 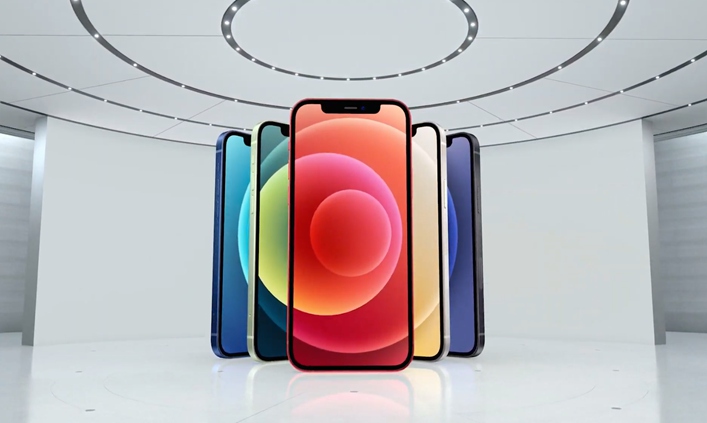 5G Phone: Every Known Phone and Shall you Buy?
Explored: Why Won't iPhone 12 Come with Free EarPods
Can You Use a New 30W USB C Power Adapter for All Apple Devices and Why?
iOS 14's Translate App: Is It Better than Translating Earbuds
Competition of New Phones in the second half of 2020 is on
How Much Does Your Used iPhone Worth

iPhone 12 Lineup Overview: What Updates Do They Have in Common

As the replacement of the baseline iPhone 11, the new 5G-capable iPhone 12 lineup has some new updates and features in design, display, camera, processor and network connectivity to improve the device.

For the 5G-enabled iPhone 12 lineup, Apple made over the design, introducing flat-edged frame which is less rounded than on the iPhone 11 but more reminiscent of the very previous iPhone 4.

As to the back of the four iPhone 12 models, it continues to be made from glass but with the two halves equipped with an aerospace-grade aluminum enclosure. On the rear, there is also a new MagSafe system which is magnet-based allowing for snapping wireless charger for precise wireless charging and attaching other easy-to-attach accessories from Apple.

As to the waterproof performance, all of these four 5G-enabled iPhone 12 models are iP68 certified, with the capability of holding up to submersion in 6 meters of water for up to 30 minutes. 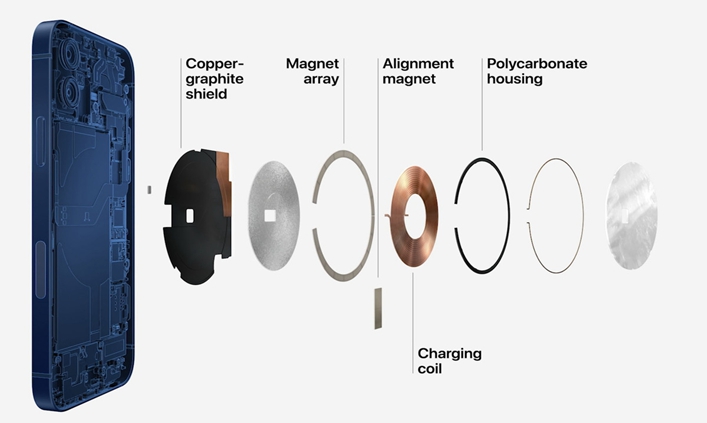 All iPhone 12 models have been upgraded in display. They all feature Apple's custom Super Retina XDR OLED display whose amount of pixels are twice times as those of the iPhone 11 display. This type of display also allows for 1200 nits peak brightness and supports Dolby Vision, Haptic Touch for feedback, True Tone, HLG, and HDR 10.

As to the overall screen, the 5G-enabled iPhone 12 lineup still remains a notch which is for Face ID function and small bezels at the top of the screen.

When it comes to the front cover of the iPhone 12 lineup, it's a new Ceramic Shield cover rather than the old standard cover glass. This kind of cover is infused with nano-ceramic crystals during the temperature crystallization process, making it capable of offering 4x better drop performance. According to Apple's statement, this cover is the most durable and the toughest in the market.

As mentioned earlier, the new iPhone lineup no longer comes with the power adapter or EarPods, which means that these accessories need to be purchased additionally. However, it still ships with an USB-C to Lightning cable by default.

While the four 5G-enabled iPhone 12 models might not seem to evolve radically in appearance, the new A14 Bionic chipset which powers them is indeed a significant stride forward. It's Apple's latest custom Silicon processor and the first chip in the smartphone field built on a 5nm process for improvements of performance and efficiency.

With 6-core CPU and 4-core GPU, the A14 Bionic allows for 50% faster CPU and GPU than other competing smartphone chips. Also, it powers a 16-core Neural Engine which allows for up to 80% faster operation for machine learning tasks than the A13 Bionic in the iPhone 11 lineup.

In short, this new A14 chip is a big step up from the previous A13 and could be the greatest chipset that rivals any other smartphone chipsets. After all, according to Apple's statement, the new chip is almost 40% more powerful than the A13 in the iPhone 11 models. 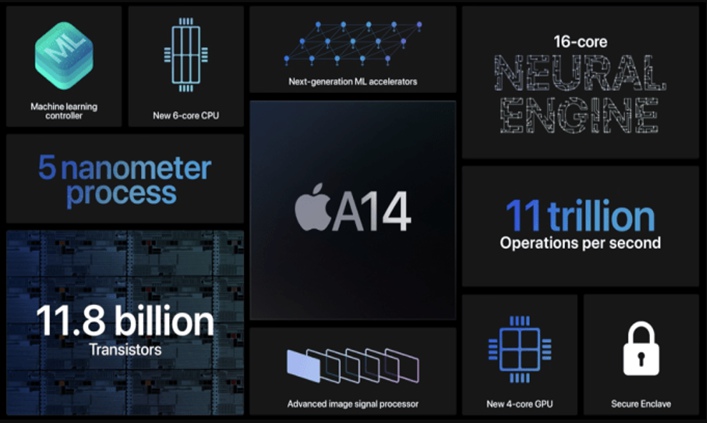 Although camera is a major differentiator, the four iPhone 12 models still have some similarity on the camera front. Thanks to the A14 Bionic processor, all of the four iPhone models in this generation feature vastly-updated computational photography which supports new Smart HDR 3 tech, better Deep Fusion as well as improved Night Mode.

The Deep Fusion enables improved images to be with more texture and less noise. The enhanced Night mode allows for better image contrast and better low-light performance. As to the Smart HDR 3 feature, it helps to capture more natural-looking photos by adjusting the white balance, contrast, texture and saturation.

Today, mobile 5G is on the way. Since 5G which has greater bandwidth than the current 4G LTE networks will allow for much faster downloads and uploads, improved video streaming, gaming and workflows, more and more smartphone manufacturers introduce their 5G-enabled mobile phones. Apple is, of course, unwilling to be outdone so it also makes its first foray into 5G by introducing the 5G-enabled iPhone 12 lineup.

To support 5G connectivity, the iPhone 12 lineup's frame comes with custom 5G antennas. And as Apple has confirmed, the 5G tech in the iPhone 12 lineup is both sub-6 and mmWave bands, which means that the iPhone 12 models will work on Verizon 5G networks in the U.S. but will need to work with all carriers across the globe which provide 5G network connections.

In addition, on the 5G front, the iPhone 12 models all feature a new Smart Data Mode to work with 5G for maximum optimization. This mode can automatically drop you back to 4G LTE to save battery life once it recognizes that you don't need 5G speeds.

In fact, 5G is the most notable new feature of the new iPhone 12 series. It will allow for a new level of performance to streaming, gaming, and workflows in the current iPhone lineup. Although the iPhone 12 lineup isn't the first 5G phone in the market, it'll rapidly hit the market and become more competitive. 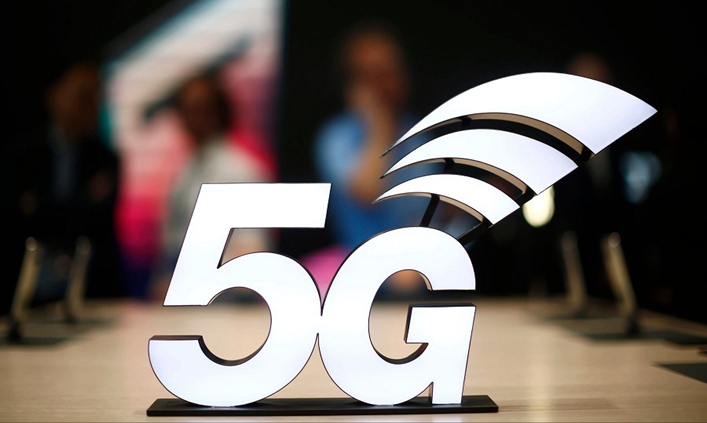 iPhone 12 Lineup Comparison: What Are the Differences

Now you must have a clear picture of the main updates and new features of all the four 5G-enabled iPhone 12 models. Simply put, compared to the iPhone 11 series, they all offer a sleek new design, more durable display, 5G support, a better-performed A14 Bionic processor and improved camera system.

But are there any differences among the four models? Well, the answer is definitely Yes. And these differences are quite important and necessary to learn about in order to make the right purchase decision to pick up the right model. The major differences between them lie in the size, colors, camera features, battery capacity and price. 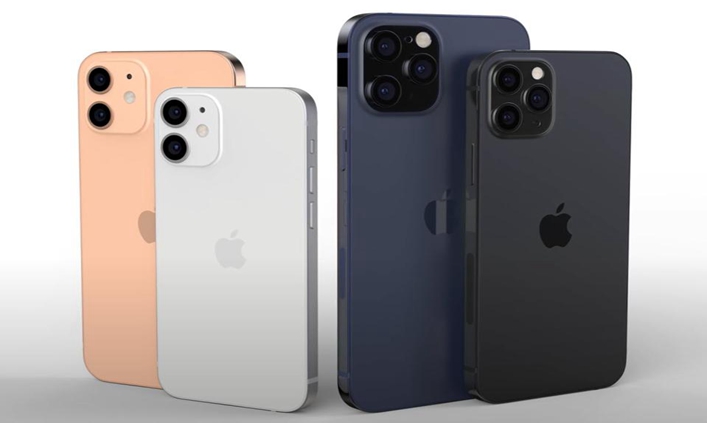 On the other hand, the two Pro models are equipped with a more advanced camera system with better optical zoom and a LiDAR (Light Detection and Ranging) sensor for more efficient autofocus and better low light performance.

Simply put, the iPhone 12 Pro models have a more complicated and more advanced camera system than that of the non-Pro models. 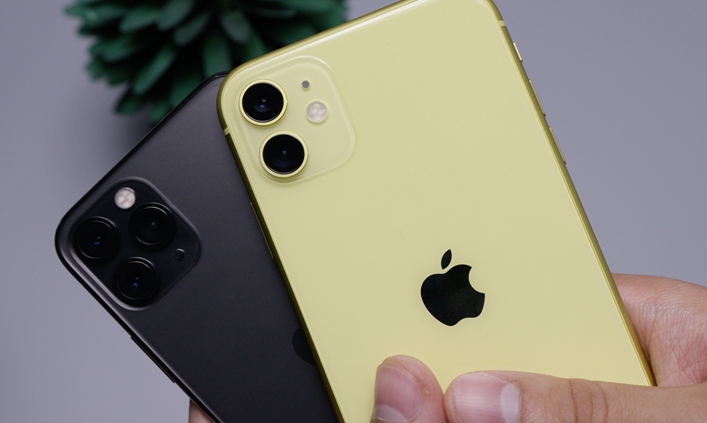 Here's Why the iPhone No Need A Large Battery Capacity

It can be said that none of Apple's new iPhone models are cheap. However, some models may cost a lot more than others. And for the same model, different configurations have different price tags. According to the official pricing, the mini model is the cheapest, then the iPhone 12, then the Pro model and finally the Pro Max. See the following table to get the price.

As for the availability, the iPhone 12 and iPhone 12 Pro will be up for pre-order on October 16 and will be sold officially on October 23. As to the two Pro models, they will arrive a little later, with pre-orders on November 6 and release date on November 13.

iPhone 12 Models with 5G: How to Purchase Them

Although they may not be more powerful than expected, as Apple's first foray into mobile 5G, the four models in the iPhone 12 lineup are still the primary phone options for many public.

If you also intend to buy the new iPhone 12 but don't know which model is right for you, you should really focus on their differences including screen size, camera features, storage capacity as well as price and select one based on your personal preferences and practical needs. But you also need to consider your budget.

Here's How to Prepare Your Pre-Order:

Step 1. Open the Apple Store app on your existing iPhone or iPad. Then Sign into your account.

If you don't have an iPhone or an iPad, go to the online official Apple store for preparing your pre-order.

Step 2. In the Featured part, click to the header. Then select your preferred iPhone 12 model, color/finish, carrier and capacity. 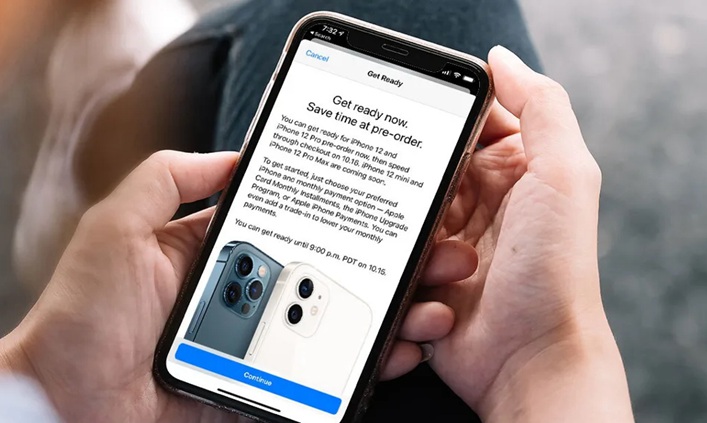 The iPhone 12 lineup is finally official after a long wait. Although the four models don't pack a lot of surprises, they still have a plethora of updates and new features such as a sleek new design, Super Retina XDR OLED display, 5G support, A14 chip and improved camera to tempt upgraders.

The all-new 5.4-inch iPhone 12 mini and the iPhone 12 Pro and iPhone 12 Pro max with more advanced camera upgrades are also attractive. Since the four models have differences in size, camera, storage and price, when shopping for one, you should focus on their differences and select one that is your budget option and is based on your personal preferences and practical needs.

Now all you need to do is prepare your pre-order in the Apple Store app to make sure you have an iPhone 12 in hand on release date. Then let's wait for the release date!