ODM Inquiry >>
x
Home News INDUSTRY
Can You Use a New 30W USB C Power Adapter for All Apple Devices and Why?

Early this month, Apple just silently released a new version of its 30W USB C power adapter carrying the new model number MY1W2AM/A out of the blue. Since the new version was introduced, the previous 30W version with the model number MR2A2LL/A has been taken off the shelf from Apple's official website.

In fact, Apple releasing something new is always unexpected, which always causes a great stir. This new 30W USB-C power adapter model, once released, has made most of the public numbed with shock as well as causing many rumors and conjectures. These rumors are almost related to Apple's upcoming iPhone 12. 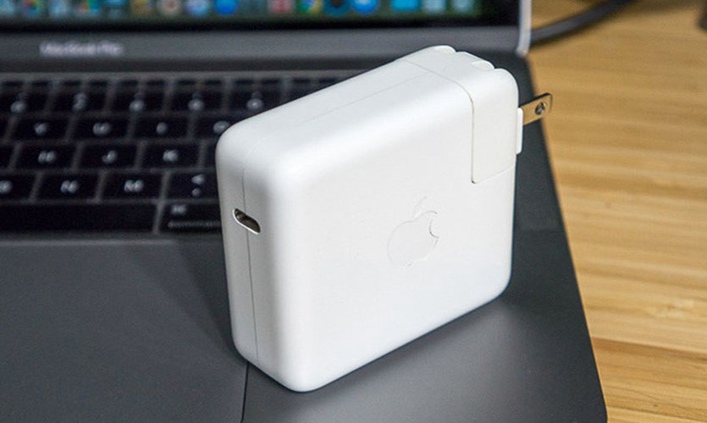 Why Did Mac & Other Laptops Kill USB Port and Adopt Type-C
Why Qualcomm Quick Charge 5 So Special and What Devices Use it?
GaN VS Normal Battery Charger: See How They Differ
What is USB C and How to Get the Most from it
5 Simple Tips for Charge Your Smartphone Faster
Does The Phone Charging Speed Depend on The USB Socket or Data Cable?

There is no essential difference between the new and the previous Apple's 30W USB C power adapter. They both have the same outward design, are equipped with a USB-C port, support the PD 2.0 protocol and own the charging gears of 5V/3A, 9V/3A, 15V/2A, 20V/1.5A. The noticeable difference is that the new's model number is MY1W2AM/A whereas the older MR2A2LL/A. But in fact, there is another difference between them - the new model (MY1W2AM / A) is compatible with more devices.

"The Apple 30W USB‑C Power Adapter offers fast, efficient charging at home, in the office or on the go. While the power adapter is compatible with any USB‑C-enabled device, Apple recommends pairing it with the 13-inch MacBook Air with Retina display for optimal charging performance. You can also pair it with selected iPhone and iPad Pro models to take advantage of the fast-charging feature."

The above words are the overview of the Apple's new 30W USB-C power adapter from the Apple's official website. As is indicated from the overview, the new 30W power adapter model has made improvement in devices compatibility. Compared with the previous version, the new version is capable of working with more devices (any USB‑C–enabled devices).

In short, even though the Apple's new 30W USB-C power adapter is compatible with any USB-C enabled devices, it cannot achieve the optimal fast charging performance when charging devices that don't support PD fast charging protocol. Also, not all Apple devices can use it for fast charging.

PD fast charging, introduced by the USB-IF back in 2012, is fundamentally a kind of fast charging protocol which is making full use of the USB Type-C port. It works by implementing a data protocol to communicate between the charger and charged device. It can realize much more power delivery than standard charging. 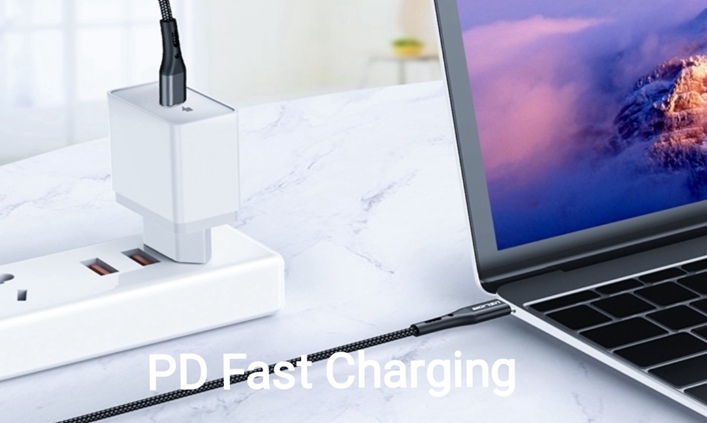 It's Expensive and Less Affordable than the Same Level Power Adapters

According to what is shown on Apple's official website, the Apple's new 30W USB C power adapter sells for the same price of $49 as the original version. However, this price is, in fact, a little bit expensive given that it doesn't support multiple fast charging protocols and is limited in fast charging performance while charging non-PD supporting devices.

If the rumor claiming that the upcoming iPhone 12 won't come with a free power adapter comes true, it isn't worthwhile for iPhone 12 buyers to spend a lot of money to buy this extra power adapter which is expensive and limited in fast charging performance on non-PD enabled devices. 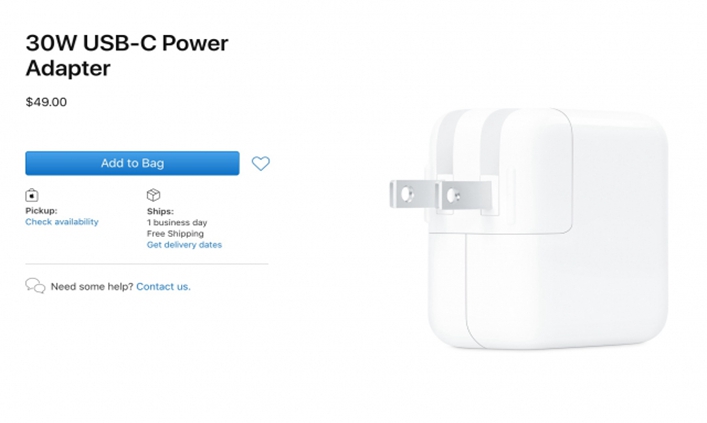 In addition, the Apple's new version of the 30W USB C power adapter doesn't come bundled with a charging cable of its own, meaning that buyers will have to repurpose their existing cables or choose to buy new ones.

For those who need to additionally buy new cables, buying an Apple's new UB C power adapter indeed costs more. That said, in order to charge your Apple devices, you will need to buy a set of Apple's charging accessories including the 30W USB-C power adapter and the extra data cable, which costs you a bundle.

After all, the Apple's new 30W power adapter model is essentially expensive and is limited in taking advantage of fast charging performance when charging devices that don't support PD fast charging. Coupled with the fact that this new version don't come with a free charging cable, it isn't worth purchasing. 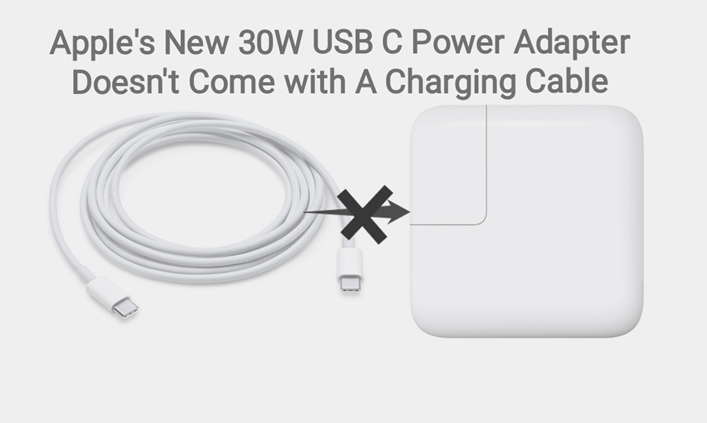 There is another reason why Apple's new 30W USB-C power adapter isn't worthwhile to buy. It lies in the fact that there are better alternatives to Apple's new 30W model - a great number of excellent power adapters which are Apple MFi certified and are in much lower prices.

Apple MFi certification is a program for companies that want to build Apple-certified hardware accessories. It means that the manufacturers of accessories for Apple devices must have their hardware certified by Apple. When a product is Apple MFi-certified, it's safe to use.

Besides, many of the Apple MFi-certified USB C power adapters support multiple fast charging protocols, making them compatible with much more devices and capable of taking advantage of the fast charging feature when charging these devices.

All in all, you don't have to pay much more for buying Apple's new version of the 30W USB C power adapter. Choosing a powerful Apple MFI-certified power adapter may be the better option. After all, the majority of the power adapters which are MFi-certified are powered with 1:1 Apple using experience and safe to use, more powerful in device compatibility as well as much lower in price.

Read This Article to Determine If the Power Adapter You Choose Is Apple MFi Certified: 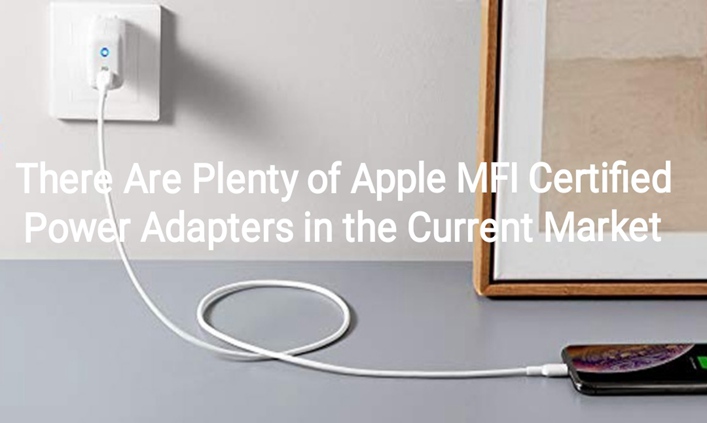 Apple's recently-released new version of its 30W USB C power adapter with the model number MY1W2AM/A may indicate that Apple won't include a free power adapter in the iPhone 12 box. Anyway, due to its limitation in fast charging performance when charging non-PD supporting devices, its high price, its unfixing with a free data cable as well as its inferiority to many Apple MFi-certified power adapters, this new 30W power adapter version seems unworthy of being purchased.