Motherboard is the main printed circuit board，integrating CPU, ROM, RAM, WIFI, NFC, Baseband, GPRS, Antenna etc. It contains most important chips like Process Chip, Memory chips, Input/Output (I/O) chips and expansion slots used to connect peripherals, of which some are permanently soldered onto Motherboard while others are removable for upgrade. 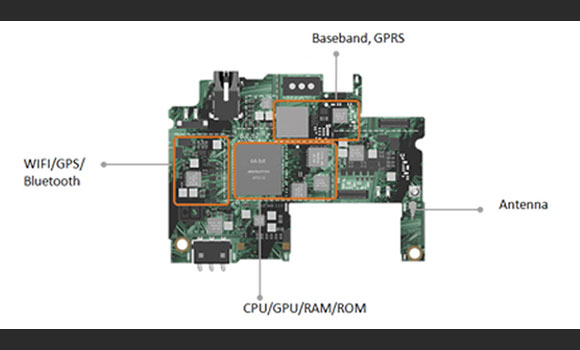 RAM (Random-Access Memory)
RAM takes the form of integrated circuits and functions as a way of data storage which stores  frequently used program instructions to speed up a system performance. Though RAM runs fast, it is normally associated with volatile types of memory, where stored information is lost if power is removed. In this case, it is useful only for temporary storage of data that requires fast access. Moreover, there are RAM and other non-volatile memory working together on a mobile phone.
Common RAM examples:  512M, 1GB, 2GB, 3GB, 4GB
CPU (Central Processing Unit)
Brain is to a person what CPU is to a mobile phone. CPU is the electronic circuitry that carries out the instructions of a program by performing the basic arithmetic, logical, control and input/output (I/O) operations specified by the instructions. It's also known as "Processor" or "Microprocessor". A powerful processor makes better performance on cell phones, making apps/programs to run faster. Raw processor speed is measured in MHz or GHz. (1GHz=1000MHz).
GPU (Graphics Processing Unit)
GPU is also called Visual Processing Unit (VPU) sometimes. It is a specialized electronic circuit designed to create images/videos and perform animation in a frame buffer intended for output to a display device. GPU is very efficient at manipulating graphics and image processing, which can be integrated into CPU or be a separate chip.
GPS (Global Positioning System)
GPS is able to receive information from GPS satellites and then to accurately calculate its geographical location. Some apps and services are designed and used on the basis of GPS. When enabled, those apps and services are able to locate your position on earth by receiving the signal from satellites. That's how a map on your handset works.
GPRS (General Packet Radio Service)
GPRS is a packet oriented mobile data service on the 2G & 3G cellular communication system across the world. It allows mobile phones to connect to internet over cellular data. In 2G systems, the rate of mobile internet is around 56 to 114 Kbit/second. Normally, users should pay for using GPRS.
Wi-Fi
Wi-Fi or WiFi is a technology with devices based on the IEEE 802.11standards ("radio frequency" needed to transmit Wi-Fi). It creates wireless networking within short-range and allows compatible devices to hook up to the Internet via a WLAN network and a wireless access point. Wi-Fi most commonly uses the 2.4 gigahertz (12 cm) UHF and 5 gigahertz (6 cm) SHF ISM radio bands.Wi-Fi several versions: 802.11.g, 802.11.b, 802.11n, etc.
Bluetooth
Bluetooth is a wireless technology standard used to transfer content within short range from compatible devices. It's employing short-wavelength UHF radio waves in the ISM band from 2.4 to 2.485 GHz from fixed and mobile devices, and building personal area networks (PANs). That being said, users can exchange data between supported devices over Bluetooth without extra fee.
Antenna
An antenna is a physical and electrical device with various shapes and sizes, which converts electric power into radio waves, or the other way around. Nowadays, an antenna is built in mobile devices.
Baseband
Baseband is a chip that works as a signal within a very narrow frequency range. In telecommunications and signal processing, baseband signals are transmitted without any shift in the range of frequencies of the signal. Baseband has a low-frequency contained within the bandwidth frequency close to 0 hertz up to a higher cut-off frequency.

As a significant part for making a cell phone, they are many suppliers on the planet. Here listed some of the most renowned motherboard manufacturers. If interested, please check it out.

Generally speaking, motherboard is strongly associated with chipset. Apart from famous motherboard manufacturer, there are three chipset supplier ranking top over the world, known as MediaTek, Qualcomm and Spreadtrum. Also, there are their official websites for your reference.